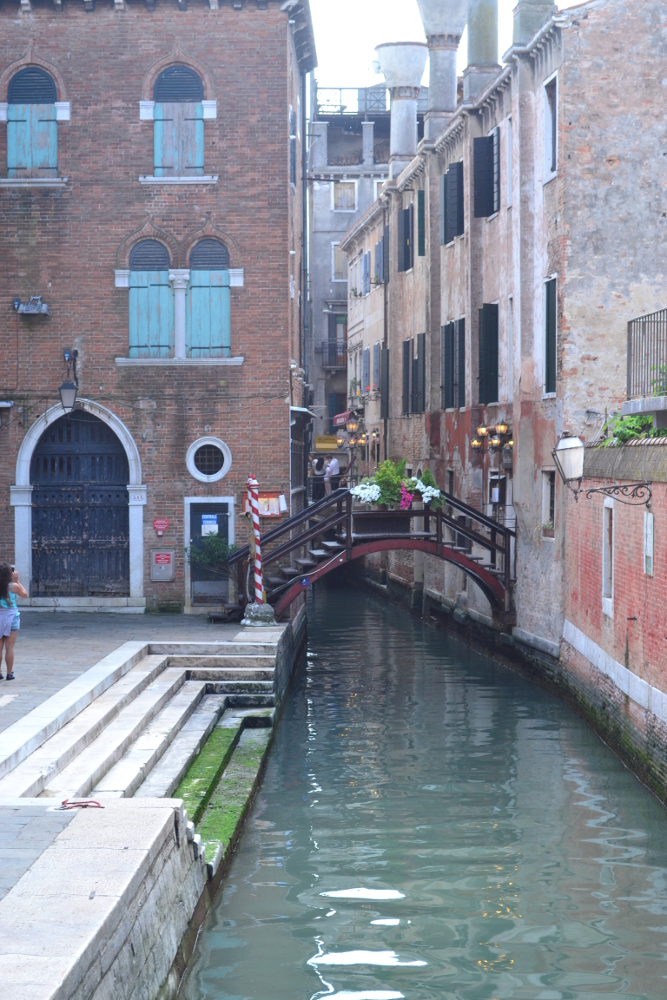 One of the places I was desperate to visit during our week in Italy was, of course, Venice. The City of Love, made up of over 100 small islands, separated by canals, and linked by bridges, is known the world over for romance, gondolas, masks, ice creams, and the original Harry’s Bar – the birthplace of the peach bellini. Having been dragged around the narrow alleys when I was six years old, I was desperate to see the sights through adult eyes – but I was also conscious that I didn’t want the children to be fed up, while I was oohing and ahhing over the architecture and the stunning views. We set off early, driving from Ca’Savio to Punta Sabbiono, where we parked the car and used our finest Italian to buy boat tickets to Venice. We opted for for the standard return tickets, costing 14Euros per adult and 7Euros per child. This seemed like a better value option for what we wanted, although if you plan on visiting more than once, it’s possible to buy tickets which cover all travel (including vaporetta in Venice itself) for a set number of hours (up to 7 days).

The boat from Punta Sabbioni takes 40 minutes to get to St Mark’s Square, and the sights along the way are interesting, which made the journey more fun for two, otherwise bored, small boys. Before we knew it, we were walking along the Riva degli Schiavoni, towards the infamous Bridge of Sighs. By this point, I was as giddy as a child in a sweet shop, just to be in Venice, soaking up the atmosphere and perusing the many stalls that line the waterfront. Although we knew we wanted to see the Rialto Bridge, and the markets nearby, we didn’t really have any firm plans for our day, and despite the throng of tourists filling the narrow streets, we managed to navigate reasonably well, discovering some back street treasure troves along the way. It would be wrong to go to Venice and not find a souvenir, and J had already decided he really wanted a glass kitten to bring home! On this note, if you find something you like, buy it there and then – you will never find your way back to the exact little shop to buy that perfect momento… I speak from experience.

Pretty soon we were feeling peckish, and, having heard many stories about the cost of eating in Venice (it costs more if you want to sit down to eat, and more still if you fancy tucking into lunch outside the cafe of your choice) we’d taken a picnic. The only place you are officially allowed to eat your own food in Venice is the public garden near to St Mark’s Square, so that’s exactly what we did. There were a few too many pigeons for B’s liking, and he was none to keen on their attempts to tuck into his bread, salami and cheese, so we didn’t hang around too long, and were soon heading towards the San Polo Siesteri, and the Rialto Markets. Naturally, we stopped along the way to sample the local gelato and coffee, and also to gather our bearings – it’s very easy to get lost in the maze of streets that criss-cross the canals, and although they are all incredibly quaint, they can begin to merge into one! Some of the fun was getting a little bit lost, though and it was on one such occasion that we discovered the best ice cream I have ever tasted – strawberry cheesecake! Whoever thought of this is a total genius! We also happened across a stunning sight of a couple having a gondola ride, complete with a man serenading them – the children thought this was amazing, and were content to just watch and listen, gazing on in awe (I think that was mainly at the man standing up and not falling off the gondola!) As we expected, the Rialto Bridge was incredibly busy – people were queuing up to have their photographs taken (and the not so British tourists didn’t bother with the queuing). The shops up the steps were filled with Venetian souvenirs, and tourists searching for that perfect momento (including B, who was searching for the perfect photo frame, and struggling to find one within his budget). The San Polo area is beautiful, and, once you get past the Rialto Bridge, nicer than the more tourist-y San Marco. We meandered through the markets, looking at the local produce (although we were sadly too late in the day for most of the fresh goods, including fish in the pescetaria). As the afternoon was ploughing on, we felt in need of a snack and decided to head to Alfredo’s Pasta To Go, after hearing very good reports. It took some seeking out, but it was so worth it. J declared his linguine bolognese to be the best pasta he’s ever had, and when he overheard some people saying it wasn’t that good, and was overpriced, he was astounded! Personally, I’d say if you are in Venice, and in need of food, definately give it a try. A portion of pasta cost around 6Euros, and was plenty to share between two for a light snack (you’d want one each for lunch though). Predicably Mr chose Viagra with rigatoni, which was a very tasty tomato, basil and chilli sauce with freshly made pasta – they actually make it then cook it while you watch! It was soon time to head back towards St Mark’s Square, taking time to admire the amazing sight of the Doge’s Palace, with all the different architecture hinting at its chequered history, and the wonderful tower that is St Mark’s Campanile, before calling in at Harry’s Bar to sample a refreshing bellini. I’m not sure what I was expecting from Harry’s Bar, but it certainly wasn’t what I got. I suppose I thought it would be grander and more impressive, but what I was presented with was a decidedly unassuming bar, lacking in any obvious magnificence or splendour. It was around quarter past five by now, and it was pointed out to my husband that long trousers were required after 6pm (he was in shorts) but we assured the waiter that we wouldn’t stay too long. The children chose apple juice and I had a bellini while Mr ordered a “bellini bambini” (non-alcoholic) as he would be driving when we got back to Punta Sabbioni. It was a fantastic experience to visit Harry’s Bar, but I have to say, I don’t think I would rush back.

After a final wander along the waterfront, it was time to wave goodbye to Venice, and board the boat back to Punta Sabbioni. Although we only had time to take in the tourist areas, I’d love to come back and explore the more unexplored areas of Venice and seesome of the more hidden sights that this wonderful city has to offer.

Top Tips For A Day In Venice

If you have a lot of particular things you want to see, make it more than a one day visit. We didn’t stop, and didn’t even attempt to spend time in the museums, or climb a campanile – something I’d like to do if ever we go back.

There’s a lot of walking to be done, and nothing will make you more miserable than getting a blister halfway through the day!

3. Stop at a cafe and watch the world go by

I love people watching at the best of times, but what could be nicer than sitting outside a street cafe in Venice, and just letting the time go by, watching people bustling through the squares while you sip a cappucino and soak up the atmosphere

According to B, the best part of our trip to Venice… says it all. If you don’t have a ride in a gondola (at £60 for half an hour, we decided to give it a miss) then make sure you watch them float serenely by. We were never going to have a romantic ride with two small boys in tow, and we thought they would lose interest after 5 minutes, but they did enjoy seeing other people ride and imagining where they were going and what they had seen or done. A cheaper way to see Venice from the water is by riding a vaporetto, or hopping on a traghetti, which are both equally good fun, I am told.