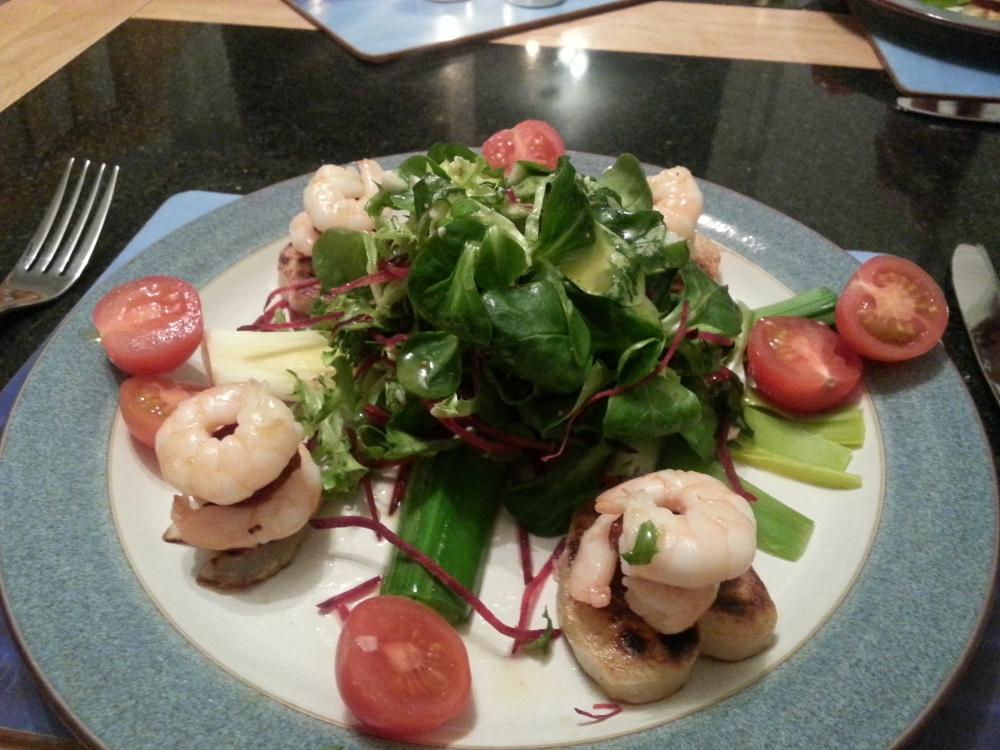 Yesterday was Valentine’s Day, and so, although we often have nice dinners, I took the opportunity to cook up something that looked a little, well, posher than our usual. I made crispy prawn and chorizo towers, with panfried valentine potatoes (they were heart shaped, but obviously don’t have to be). We ate at the table (more often it’s on our laps in front of the telly… yes, yes, I know this is a bad thing, really).

I took inspiration from another prawn and chorizo recipe, but made it more of a main course. I was pretty darned pleased with it, I can tell you! 1. Boil the potatoes in slightly salted water, until tender, then remove from the water
2. Using the same pan, lightly fry in a little olive oil (or you can use chili oil for more kick)
3. Make the dressing my mixing the lemon juice, olive oil and garlic together and season lightly.
4. Boil the leeks until tender. When cooked, drain immediately and put in a bowl with the dressing, turning to coat.
5. Fry the slices of chorizo until crispy and the oils are released. Remove with a slotted spoon and leave to rest on a sheet of kitchen paper.
6. Fry the prawns in the same pan until cooked (if raw), or heated through.
7. Arrange the leeks on a plate, with leaves in the centre (I used an old drinks bottle, cut up, to try to get the leaves in a cylinder shape, with varying results- one worked really well, the other less so). I added cherry tomatoes at the ends of the leeks too.
8. Place a slice of potato in each quadrant, and alternate chorizo/prawn/chorizo/prawn in a tower on top (you can use a cocktail stick to secure if necessary – or just carry the plates really carefully!)
9. Add the herbs to the remaining dressing, drizzle over, and serve.

I think it’s fair to say these prawn and chorizo towers looked super impressive, were really tasty, and it really quite healthy, coming in at only 350 calories, which is useful for anyone watching their weight.

A bit fiddly getting the its ready to start, as it’s all a bit last minute, although the recipe it’s adapted from is served as a cold starter, so it could be made in advance if you wanted to do this. Simple enough to actually cook though

I usually change things a little if I cook them again, but I’m not sure I would with this, actually. Perhaps a little less dressing and it got a little oily towards the end of the salad.

If you’ve cooked something great this week, why not link up with #CookItBlogIt over at Frugal Family and Recipe of the Week at A Mummy Too for more great ideas.

8 thoughts on “Prawn and Chorizo Towers, with Panfried Valentine Potatoes – A Romantic Recipe”