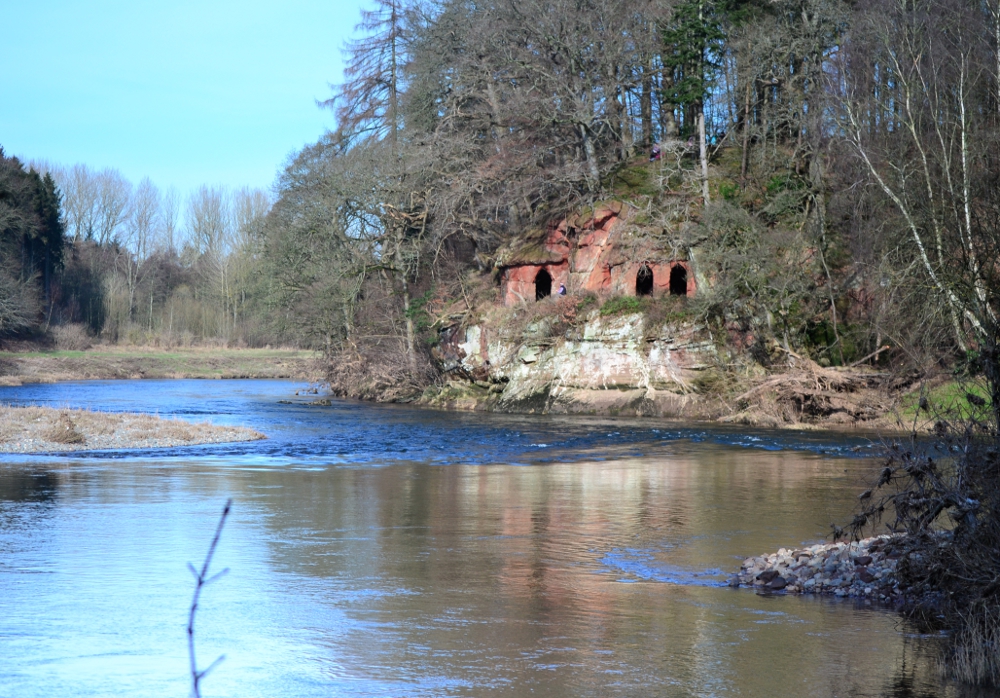 Waking up yesterday morning, it was such a glorious spring-like day that we couldn’t not go for a walk. The children boys had been sleeping over at their grandparents’ house so we got up and went to collect them, then headed off to Little Salkeld, where we had heard of a nice walk to Lacy’s Caves, where we could make a circular route taking in Long Meg and her Daughters on the way back. I was reliably informed (by Mr) that this was a total of about 4.2 miles, which was a bit of a stretch for little legs, but figured with a bit of encouragement they could do it. And the lure of a geocache to find always helps. We parked in Little Salkeld (A), and set off down the farm road in the direction of Lacy’s Caves, walking along next to a railway line. The views across the field were lovely, and we had fun letting the children play in trees along the way.

After a while we came to a wood, Caves Wood, which were very pretty, though rather muddy in places (glad I had my wellies!). The caves (B), which were about 2 miles in to the walk, were great. The children loved exploring them – but be careful of steep drops! Lacy’s Caves were commissioned by Lieutenant Colonel Samuel Lacy in the 18th Century, and he is known to have entertained guests there, although the reason for creation is not known. After they had tired of the caves, we ummed and ahhed about whether to go back the way we had come, or carry on with the circular walk. Given we thought we were about half way through anyway, we decided to carry on through the woods, which were full of snow drops, adding to our high spirits. When we came out of the woods, we climbed a bit of a hill, then across a field to a stile, which led down an embankment to the road. Now, we were relying on Google maps, which in hindsight was a bit of a mistake… it seems not to show footpaths very well. Because of this, and because we were relying to a certain extent on memory, we knew we needed to follow the road for a while, before making a right turn to Long Meg. Road walking was a bit boring for the children (and not brilliant for us, if I am honest). The roads were very chilly, and while we had stripped down to jumpers (not quite T-shirt weather yet) on the paths, the long straight roads made perfect wind tunnels. but what could we do but plough on? So on we ploughed. We found a nice little playground at Glassonby (D), which proved a good distraction for the boys, before we headed off again. Not far after the sharp right turn, with Ben complaining his toe was hurting because apparently his wellies are too small (oops, bad mum) and Josh’s legs being very tired, I decided that the best plan was for me to go ahead and fetch the car – they had already walked 5 miles by this point, and as this was the first walk of the year, it wasn’t exactly breaking them in gently. So I set off on my route march, while Mr stayed with the children, carrying on walking, but more at their pace, than ours.

After another half a mile or so, I saw a sign for Long Meg (E), but I carried on past it towards Little Salkeld, which was only half a mile further on. When I returned with the car, the children and Mr had made it as far as the sign, but they opted to miss out Long Meg and go straight to the Little Salkeld Mill and Tearoom, where we enjoyed tea and scones, and I bought some “Harvest” flour to make some delicious bread. The mill is one of the few water powered mills still in operation, and I am looking forward to trying some bread made with organic stoneground flour. Despite the length of the walk, after they had rested the children said that they enjoyed it and the caves were the best bit, They have asked if we can do the Long Meg part another day, so it evidently wasn’t all bad.

If you’re going to do this walk, we have now discovered that there are shorter routes… you can turn onto a footpath not long after you join the road, way before you get to Glassonby, which takes you through fields and woods, making it far more interesting, as well as about a mile and a half shorter.

One thought on “Weekend Walk – Lacy’s Caves and Long Meg”